February 12, 1969, about 6:00 am. On the rooftop of Hombu dojo, the Founder prays to Amaterasu O Kami (the Shinto God of the Sun). At the time this photo was taken, the new Hombu dojo had only three floors. Later the fourth and fifth floors were added. Author John Stevens describes this photo as being taken before the Founder went to Hawaii. This is incorrect. At the time the Founder visited Hawaii, the new Hombu dojo had not yet been built. I took this photo as one of a series of three. The camera was borrowed from Mr. Tsunoda, who later developed these photos. I still have the negatives. 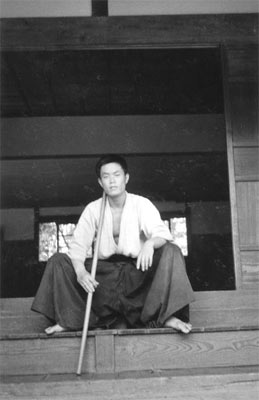 At that time in Japan, most long distance travel was done mainly by train. The unreserved cars were always jammed with bodies, boxes, trunks and cases. It was easy to elude the ticket master in all the chaos as he came to collect tickets. As far as getting out of the station went, if you looked carefully on the floor and under the seats, you could usually find a ticket that someone had lost. Remember technology and security thirty years ago, was not anywhere near what it is today. It was in this manner that I return to Tokyo for the Founders first memorial service.

For years I have heard of dojos that mark this anniversary with Memorial Seminars. For me it is a day of quiet prayer and reflection. As we come upon the 33rd anniversary of the Founders passing, I would like to share with you some of my personal memories of living with the Founder about a year prior to his death. My sister has saved the notebooks I kept during those years, so I still have detailed information about his daily routines. I even recorded what the Founder ate on a typical day, which I will share with you at the end of this article.

In 1968, at the age of 85, the Founder slept in a new addition to the Iwama dojo living quarters. His wife Hatsu slept in the next room. Off the main room to one side was a tiny room where the maid Kikuno slept. The room that served as my sleeping quarters on the other side of the dojo no longer exists, having been demolished after falling beyond repair with age. Except for the four of us, no one else lived in these quarters at the time. Unlike Iwama dojo today, there were few gasshukus (aikido camps) to fill the dojo with a bustle of bright-eyed students from afar.