1940
He received the world’s first aikido 8th dan from Ueshiba and began his research into modernising aikido. Every summer for the next 4 years he instructed senior grades at Kodokan on a committee that researched into techniques where there is some distance between the two participants.

1945
He continued to work on his ideas for budo during his detention in Siberia after the defeat of Japan in World War II.

1953
Together with Sumiyuki Kotani and Tadao Otaki he went to America as part of a judo delegation to instruct the U.S. Airforce in 15 states.

1954
He became a professor at Waseda University an d headed the university’s Physical Education department. He published ‘Judo Taiso’. 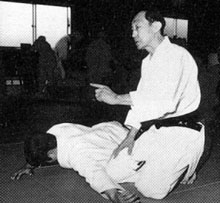